In the world of food and wine, nowadays everybody’s talking about specialization. The world’s top restaurants are making names for themselves with revolutionary prep and cooking techniques while wineries are making wines from rare or newly discovered varieties and aging them in innovative ways in oak from the four corners of the world. Anything goes as long as it’s original.

The other day however, we ate at a small neighborhood restaurant in Santander where we were served everyday Spanish home cooking: beef stew, meatballs, grilled sardines, and salad, washed down with a chilled bottle of unlabeled red wine mixed with ‘gaseosa’, a fizzy, sugary bottled water whose closest equivalent outside Spain is Seven-Up. 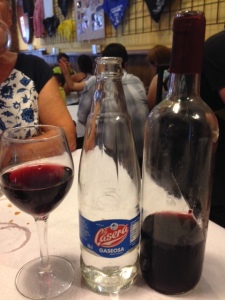 A no-name wine with ‘gaseosa’

It was delicious (and unbelievably inexpensive – 24 euros for two), reminding us of meals in Madrid in the early 1970s when we used to go to the same local restaurant every day for lunch and served hearty portions of home cooking with unlabeled wine in carafes or bottles, two courses, dessert, wine and coffee for next to nothing. I vividly remember that the restaurant served a different main course every day, every week. I don’t remember the exact days, but it was something like chickpeas on Monday, beef stew on Tuesday, fried eggs, rice and fried bananas smothered in tomato sauce (arroz a la cubana) on Wednesday, paella on Thursday and fish, usually breaded fried hake fillets on Friday.

There was nothing pretentious about the food. No novelty, no experiments, just good, filling comfort food like people ate at home. And when you’re on a tight budget like we were, big lunches like those tided you over until the following morning.

Back then people would take their empty bottles to the corner tavern where the bottles were filled from a big vat with a spigot. The first year I lived in Spain was in a boarding house and the housemother used to ask any boarder who happened to be around before lunch to go out with a couple of bottles to fill. Restaurants would have this kind of wine wine delivered in large dame-jeannes called ‘garrafas’ where they were decanted into bottles or carafes. 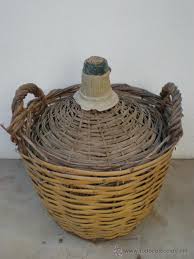 I never knew where this wine came from – it could have been Valdepeñas, La Mancha or Gredos west of Madrid – it was certainly from an area near Madrid – and didn’t have an appellation of origin. It didn’t even have a label! However, when chilled and mixed with ‘gaseosa’ it was the perfect accompaniment to simple, cheap, tasty, filling meals.

You might be wondering why everyone mixed the wine with this fizzy water. It wasn’t because the wine was undrinkable by itself but rather because we guzzled it like water. Moreover, in the summer, with temperatures almost always over 100º F (38ºC) it was the only way you could drink wine. 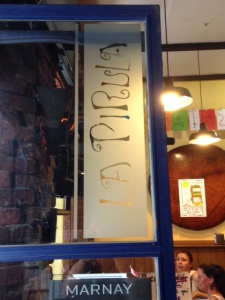 The next time you’re in Spain, try one of these local restaurants, called tascas, tabernas or casas de comida where you can get a menú del día for as little as 10 euros. Try the house wine with gaseosa. No visit to Spain is truly fulfilling without this experience.