Rioja entered the modern era in the mid-19th century when several innovative wineries adopted Bordeaux winemaking practices, notably ageing in small oak casks. When phylloxera devastated French vineyards, many wineries from Bordeaux and other red-wine producing regions came to Rioja looking for wines to send back to France. Local entrepreneurs took advantage of this circumstance to found wineries, many of which still do business today. The center of this activity was the railway station district in Haro, an ideal location for sending wines to the nearby port city of Bilbao for international shipment. 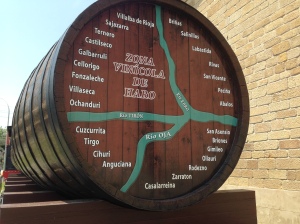 On September 18, Tim Atkin, Master of Wine and award-winning wine journalist, will give a seminar and historical tasting of wines from these seven wineries to professionals followed by a day-long open house for an en primeur tasting of recent vintages.

September 19 is open to the general public. Consumers can purchase tickets online that will provide access to the seven wineries, a tasting of one wine at each as well as three ‘tapas’ from a central booth. Throughout the day, surprise activities will take place around the winery district.

Further details and ticket information is available at

Inside Rioja will cover this event so watch these pages for an extensive recap of this important event in the Rioja tasting calendar. 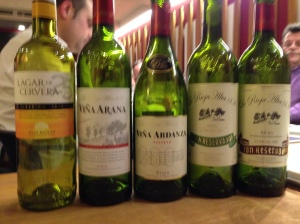 A selection of the range from La Rioja Alta(T. Perry) 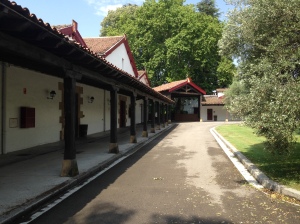 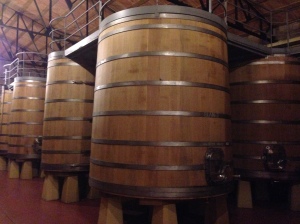 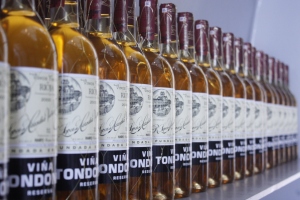 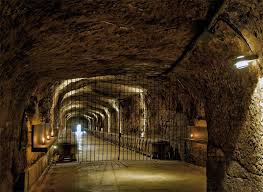 The Barrio de la Estación (Railway station district) in Haro boasts the highest concentration of hundred-year old wineries in the world.  The railway to Bilbao, completed in the middle of the 19th century, was the most convenient route to ship wines to the port and from there, to the rest of Europe and America, so it was logical that the wineries decided to build here. Within a five hundred meter radius you can find Bodegas López de Heredia (founded in 1877), La Rioja Alta (1890), Gómez Cruzado (1886), Bodegas Bilbaínas (1901), CVNE (1879) and Rioja Santiago (1904).  The ‘youngsters’ in the neighborhood are Muga (1932) and Roda (1987).

A few weeks ago, I took a group to several Rioja wineries.  One of our stops was at La Rioja Alta.

Lots of changes had taken place at the winery since my last visit.  The company no longer uses its old wooden fermentation vats but has kept them for show as a reminder of how its wines used to be made.  I remember a visit during the harvest a few years ago. We noticed a group of young men shivering under blankets outside the vats.  Their job was to remove the pomace from the tanks after fermentation but they could only work for a few minutes at a time and had to be careful of the carbon dioxide that lingered in the vats.  Most of the backbreaking manual labor in wineries has been replaced by technology (in the case of fermentation vats, with self-emptying tanks), but intensive manual labor still very evident here as recently as the 1990s.

One of the things you notice at the bodega is the huge number of 225-liter oak casks used for aging the wines.  La Rioja Alta claims that it ages its wines much longer than the minimum time required by the Rioja Regulatory Council.  In fact, the crianzas from the winery could qualify as reservas and the reservas as gran reservas. On average, Rioja wineries hold just under three years of sales as inventory but La Rioja Alta’s is a whopping nine years of sales.  The winery states that they finance expansion with their own funds, so you can imagine the effort it takes to finance this inventory. 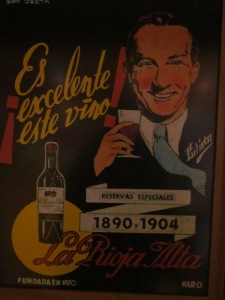 La Rioja Alta’s brands are homages to past directors of the company and to significant events in its history.  Its most prestigious gran reserva,  ‘890’ is named for the year the company was founded (without the ‘1’ due to opposition from the Regulatory Council).  Gran reserva 904 commemorates 1904, the year Bodegas Ardanza merged with La Rioja Alta.  Viña Ardanza is named for Alfredo Ardanza, one of the founders of the company, Viña Alberdi after Nicolás Alberdi, the president from 1947 to 1952 and Viña Arana for José María Arana, a vice president of the bodega.

I had a chance to chat at length with one of the staff that I had known from earlier visits.  She had been working at the winery for over twenty years and planned on working there for twenty more.  It never ceases to amaze me that most of Rioja’s family owned wineries like López de Heredia and La Rioja Alta treat their staff as members of the family rather than just employees.  You could certainly tell that they were happy working there and I’m sure they thanked management by working extra hard. This is refreshing. Friends tell me that in Spain’s tough economic climate, managers aren’t usually very nice to employees, figuring they’re easy to replace.

One of the winery’s ageing cellars

One of the highlights of the visit was the tasting. The last time I visited the winery, Julio Sáenz had recently taken over from longstanding winemaker José Gallego, who had retired. Gallego’s wines were made in a classic style, with around 12% abv, not very intense color and delicate aromas of cedar, cigar box, stewed strawberries and spices, but with a backbone of elegant tannin and acidity.  I discovered that Sáenz had added a layer of intensity to the wines without compromising their undoubtedly classic character.  They were recognizably La Rioja Alta wines but with a little more zip.

95% tempranillo, 5% mazuelo.  3 years in oak, at least two years in the bottle (this would qualify it as a gran reserva).

I was blown away by the Ardanza and bought six bottles on the spot!

Blend of tempranillo and garnacha.  4 years in oak, 4 years in the bottle.

Cherry/brick; nose closed at first, opening up to stewed fruit and chocolate, perfectly balanced.  Really alive in spite of being 12 years old.  I caught a whiff of old barrel – the wine would probably open up more with time (but we had to leave the winery so I never got a chance to find out).

I asked when the 2004 would be released and was told, “when it’s ready”. I should have known!

La Rioja Alta, like many other Rioja wineries, has branched out from its original winery in Haro with the founding or purchase of other wineries, both in Rioja and in other wine regions in Spain.  Its Rioja wineries are Torre de Oña in Páganos near Laguardia and a big vinification plant between Haro and Labastida.  The company also owns Lagar de Fornelos in Rías Baixas and Áster in Ribera del Duero.