Who doesn’t like an outdoor cookout? Whether it’s a South African braai, throwing some shrimp on the barbie in Australia, smoking ribs or grilling hamburgers in the back yard in the USA, making a meal outside is a great way to entertain friends and families.

In the Rioja region, our version of the cookout is grilling baby lamb chops over coals from vine cuttings, and the traditionally accepted way to eat them is with your hands, even in restaurants. Once at a large event at a Rioja winery, the chefs grilled lamb chops for guests that included Spain’s King Juan Carlos. When the king received his plate, everyone in the room held their breath to see how he was going to eat them. When he picked up his chop with his hands, the guests breathed a sigh of relief and picked theirs up, too!

One of the most popular events during the wine festival in Logroño in late September is the “celebration of the lamb chop”. According to two of my friends who grew up in the neighborhood, this tradition started in the 1970s when a local bar organized a contest to see who could eat the most lamb chops. Participants came from all over Spain and the winner was determined by weighing the bones.

This contest no longer takes place, but to commemorate it, the Riojan Social Club Federation, with the blessing of the city hall, closes off four blocks of one of Logroño’s main streets on the last Saturday morning of the wine festival. Groups of friends sign up to participate and for a fee of 80 euros, each group is provided with a table, four chairs, a big plate of lamb chops, a large steel plate on the street, a special lamb chop grill and several big bunches of grapevine cuttings. This year there were 125 tables. The groups always bring thick slices of bacon and other pork products to grill, sliced tomatoes, olives, spicy green peppers, chorizo and of course, plenty of bottles of Rioja and cans of beer. Friends and passers-by are encouraged to enjoy the atmosphere. 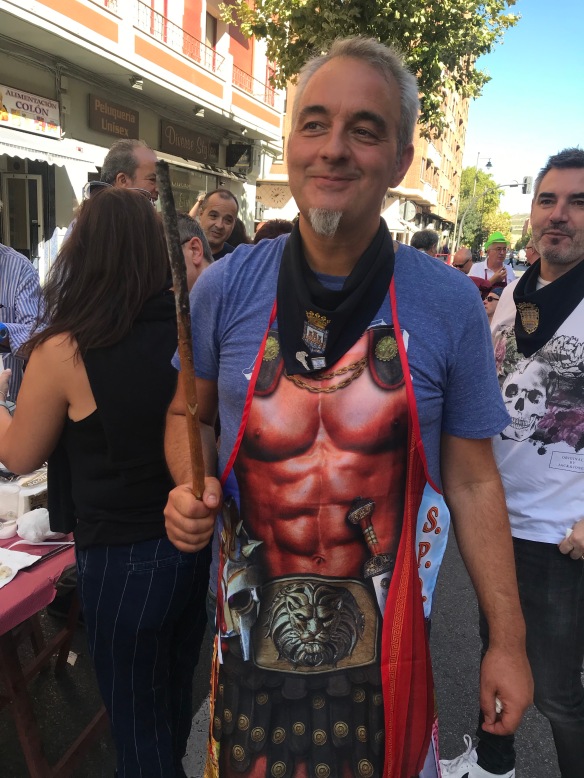 A grillmeister with a sense of humor

At the table I visited, everyone was talking about two anecdotes. The first was about two tourists who happened to walk by during the cookout and were invited to have a few lamb chops and drink some wine. They readily accepted the invitation and then asked what for them was a logical question: “How much do we owe you?” Our group roared with laughter and told them that it was free. The tourists walked away dazed. Such is Riojan hospitality!

Dead soldiers in the gutter

The second anecdote was the previous night’s controversy about Logroño’s new mayor saving the traditional ‘burning of the wine barrel’, the event marking the end of the wine festival. The mayor’s reasoning was to participate in the World Climate Strike to help save the environment. Everyone looked at the dense smoke rising from the hundreds of smoking grills in the street and wondered how much heat the mayor was going to get on social media and at the next city council meeting. He was appropriately roasted!

Smoking grills with lamb chops – Notice the grill-it can be flipped over to cook the chops on both sides. 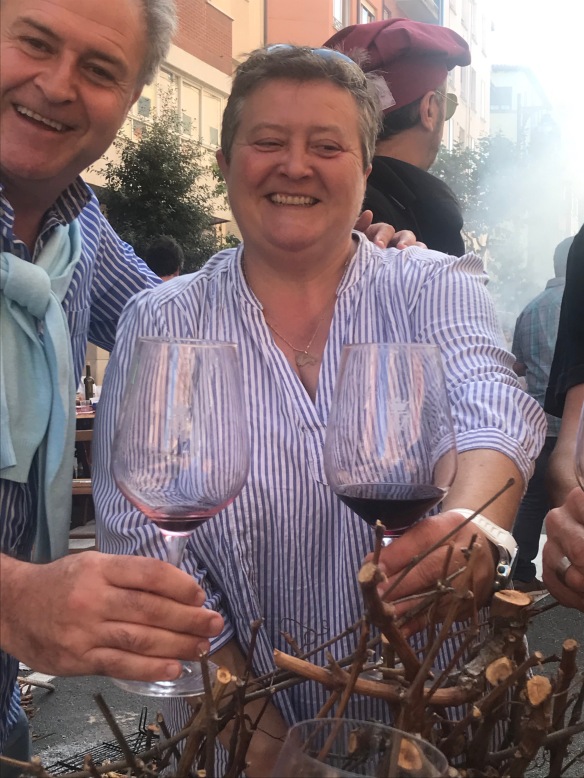