December 28 is Spain’s April Fools’ Day so when I opened the local newspaper and read that Artadi, one of Rioja’s most prestigious wineries, was planning to leave the Rioja DOCa, I immediately thought it was a joke. But when I read the editorial on page two explaining that the current president of La Rioja wasn’t going to run for office in the upcoming elections I realized that this piece of news was the joke and the story about Artadi was on the level.

Behind Artadi’s interest in creating a new appellation for wineries in and around the village of Laguardia in Rioja Alavesa is the belief that the umbrella brand ‘Rioja’ and its claim ‘the land of a thousand wines’ attempts to express the huge diversity of styles of wine that exists in our region but lumps them all together under one appellation. Put bluntly, Artadi feels that the current rules of the Rioja DOCa don’t allow wineries to talk about the specific characteristics of microclimates, soil types and the grapes and wine produced in individual vineyards and villages.

The reaction of the wine and growers’ groups in the Regulatory Council was immediate and can be summed up by “Bring your proposal to the Council and we’ll talk about it”.

Only time will tell whether Artadi’s proposal to leave Rioja is real or is a gambit meant to accelerate the debate leading to simplifying the procedure for recognizing single vineyard, single village, and single subzone wines within Rioja. Whatever the outcome, there are a number of reasons to put the issue at the top of the agenda. 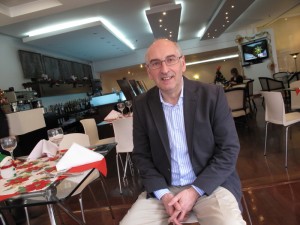 First, today there are over 600 wineries in Rioja. Wineries have always realized that to succeed they need a competitive advantage to convince the wine trade’s gatekeepers (distributors and retailers) to offer them to consumers. When there were fewer wineries in Rioja, fewer Spanish appellations, the New World wasn’t a force yet, and superstores hadn’t overpowered distributors, it was a plus for a winery to say it was from Rioja. Today, being a Rioja winery just isn’t enough.

Under these circumstances, it’s not surprising that there’s a lot of pressure in Rioja to allow wineries to express themselves in new ways. What I wonder is “Why Artadi?” They’ve successfully exploited their competitive advantages and are at the top of the heap.

I can think of several reasons.

First, the Rioja Regulatory Council has been slow to discuss the demands of smaller properties to certify single vineyard, single village and single vineyard wines. When the Spanish Agriculture Ministry created the current wine law, it created a hierarchy starting with table wines at the bottom with few or no quality demands, appellations of origin and ‘qualified appellations like Rioja with strict control procedures and ‘vinos de pago’ or single estate wines at the top, with very strict requirements. The Rioja Council found a number of reasons to criticize the rules and their possible application in Rioja, starting with “what is the maximum size for a single estate?” citing examples of single estates in central Spain with almost 1000 hectares. If 1000 hectares seems like a lot of hallowed ground for a single vineyard, Is five OK? Or ten? Is a single estate wine inherently better than a blended reserva or a single varietal? Why should single estates be at the top of the hierarchy? How will the Council guarantee that the wine comes from the single estate? After a couple of meetings, the discussion became so complicated that the matter was shelved.

What’s the problem?  If the Council allows wineries to say that they sell single varietal wines, why not single estates? Hmmm.

Given the drawn-out decision making and consensus building process within the Council, I can imagine that Artadi figured it would be easier to withdraw its vineyards from the Rioja appellation and create its own mini-appellation where the rules are clear from the outset and membership is exclusive.

A second possible reason could be to add other grape varieties to the current ones allowed in Rioja. If these vineyards are exclusively in Álava, the Basque government could petition the European Union to authorize new varieties. The head of the agriculture department of the government of La Rioja hinted in a followup article that the Basque government might be behind the whole affaire in an attempt to create an exclusively Basque denomination of quality wine, an issue that has always been on the political agenda in the Basque Country.

I’d like to think that the threat by a top winery to leave Rioja will push the Council into rethinking its policy of single vineyard, single village and single subzone wines to allow not only Artadi but many other wineries to express what they perceive as unique attributes of their properties and wines. But for the sake of keeping things simple for consumers, let’s keep calling them all ‘Rioja’.  Do we want lots of sub-appellations like Bordeaux or an almost inscrutable mish-mash of vineyards-within-villages like Burgundy that only Masters of Wine understand?  Maybe the MWs don’t either!

Spanish newspapers are fond of making end-of-the-year lists about just about everything: best box office hits, most titles won by a football team, celebrities in jail for tax evasion, politicians in jail for influence peddling, regional governments with the highest debt per capita and others.

In keeping with this list-making tradition, here are the Riojas I liked the most in 2014 (in no particular order of preference):

I also really liked the following wines from other appellations and countries:

Of course I tasted and enjoyed lots of other wines but these were my absolute favorites.

4 thoughts on “Special end of year double issue: Artadi threatens to leave the Rioja appellation and My favorite wines from 2014”