On January 2, some very good friends who are also well connected wine buffs visiting from Miami invited my wife and me on a field trip deep into enemy territory – the heart of Ribera del Duero.  It was unthinkable to refuse because our destination was Bodegas Vega Sicilia, Spain’s most iconic winery, practically impossible to visit unless one is a distributor or an A-list journalist. Our hostess was the very knowledgeable, very charming export director, Puri Mancebo, who must have the best wine job in the world.

Puri, armed with a degree in economics, found the job at the winery while working as an economist at the Spanish Embassy Commercial Office in Sofia, Bulgaria.  After several years there, she figured it was time to move back to Spain.  During her search, one of the companies that contacted her was Vega Sicilia.  They told her to take her time – she could call them once she had returned to Spain.  To make a long story short, she got the job –  with the parent company – who sent her for a year to Hungary to develop international sales at Oremus, the group’s winery in Tokaj.  Puri says that the company must have figured, “if she lasts here, she’s the right person for the job at Vega Sicilia”, and so it was.

It was her first job in the wine business and she dove in headfirst, acquiring an impressive wine education that would allow her to speak with authority to the company’s customers and consumers around the world.

Puri doesn’t sell wine per se – it’s already been presold to longstanding customers with a yearly allocation. Her job is to meet customers, give tastings and host wine dinners around the world, a job that keeps her away from home 60% of the year. It’s a demanding job but obviously worth it.

The process of allocating bottles to customers fascinated us, so Puri explained how it worked.  We thought that the winery directly assigned a given number of bottles to each distributor every year but that’s not exactly true. Customers have the first word. Every January the winery sends out an allocation letter with the numbers left blank.  The distributor fills them in based on their expectations The winery juggles the figures based on available inventory, and, I suppose, past performance.

For any winery, this might seem to be an ideal situation, but one has to remember that it took the winery over one hundred years to cultivate this image, so patience is required. 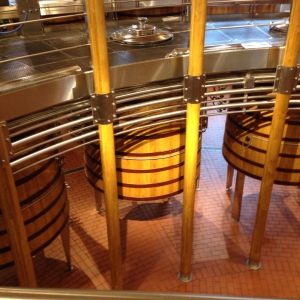 For me, a visit to any winery outside Rioja inevitably inspires comparison with how things are done in Rioja.  There were a lot of things different about Vega Sicilia.

The first thing that came to mind was the fact that the winery had lived in a vacuum in the Duero valley for most of its 150 year history, so it wrote its own rules about grape varieties, winemaking and aging rather than having to adopt rules made by others. In fact, when the DO Ribera del Duero was founded in 1982, the grape varieties authorized were the ones cultivated at Vega and the winery was no doubt the nucleus around which the DO Ribera del Duero was created.  Curiously, some of the wineries founded in the area chose not to join Ribera (Bodegas Mauro and Abadía Retuerta are probably the best-known) but rather joined ‘Vinos de la Tierra de Castilla-León’ when changes in the Spanish wine law made it possible to create new designations that allowed wineries not in the DO system to put vintages and grape varieties on their labels. Before that time, either you belonged to a DO, A DOCa like Rioja or you were a ‘vino de mesa’, in other words, a table wine, synonymous with plonk. For some wineries, the DO system was seen to be too rigid and intrusive.  If any winery in Spain could have gone solo it was Vega Sicilia, but to its credit, it joined the DO. This doesn’t appear to have affected its style one bit.

Another difference about Vega Sicilia is that grapes from each of its 85 vineyards are vinified separately.  For Puri, the essence of the winemaker’s skill is “the art of blending”.  No single vineyard or single varietal wines here.  In this respect, Vega is like Rioja in the old days.

There are 19 different soil types on the estate, ranging from those in hillside vineyards to others near the Duero river.  As a general rule, the vineyards between 35 and 70 years old produce grapes destined to become ‘Unico’ while those from 20 to 35 years old produce Valbuena.

The grapes meant for ‘Valbuena’, the winery’s second label, are vinified in stainless steel tanks while those destined to become Vega Sicilia ‘Único’ and ‘Único Reserva Especial’ are vinified in 19 oak vats.

State of the art winemaking technology is visible all over the winery.  Puri explained that there are mushroom-like devices on top of the malolactic fermentation vats so the winemaking team can see if malo has finished.  I also saw a device I had never seen before:  an elevator that takes  a tank from one floor to the other to avoid the ‘stress’ produced on the juice by pumping it over the cap during fermentation.  Only three of these ‘elevator tanks’ are in use in the wine world today:  one at Cos d’Estournel in the Médoc, one in California and this one.

A striking difference between Vega Sicilia and Rioja is how the wines are aged.  At Vega Sicilia, after malo, the wines are aged for a short time in 225-liter barriques, followed by more prolonged aging in large oak vats, then bottling. The vat stage allows the different wines to blend together. In Rioja, wineries almost always bottled directly after long aging in small barriques.

Vega Sicilia’s deep pockets allow it to replace these large vats, which are built on-site after five or six years.  The Rioja wineries that use large oak vats for fermentation make a big deal about the fact that  vat coopers are few and far between in the world, so accessibility to them is limited to a select few wineries.  This doesn’t appear to be a problem at Vega Sicilia.

one of the barrel cellars at the winery

Único Reserva Especial, a blend of the last three vintages of Único’, is released 15 years after the harvest and according to Puri, only sold in magnums.  Only 15.000 bottles are released. 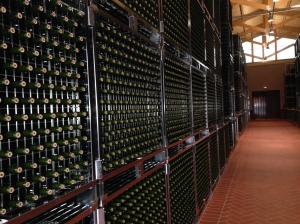 Following our tour of the winery we went to the family home surrounded by vineyards, which is now used for corporate events.  We tasted the Valbuena 2009, to be released in March and the Único’ 2005, which will be released in 2015.

My tasting notes (with a slightly diminished sense of smell and taste after two weeks of nonstop holiday partying):

Black cherry with a brick meniscus.  Nose closed at first, opening up to lush cherry and plums with vibrant acidity, perfect balance and elegant tannins.

What struck me the most about these two wines was how perfectly balanced they were – no sharp edges anywhere.

I wondered, however, if I would have identified them as coming from Vega Sicilia if they were in a blind tasting with other wines from Ribera del Duero.  Of course they were very good but there are, of course, lots of other very good wines from this region. One’s expectations are high when tasting iconic wines if you’re looking at the labels or at least know what brand you’re tasting.

My prior experience with Vega Sicilia was limited to a bottle of Único consumed, of all places, at a picnic in the country with some friends in the mid 1970s and two bottles with some colleagues from the wine business at a restaurant in Osaka, Japan (if my memory serves me).  This last experience is worth elaborating on. We looked at the wine list and noticed that the wines were inexpensively priced, so we ordered and drank two bottles of Único.  Later, we asked the owner why the wines were so cheap.  He explained that he wanted to encourage people to drink wine so he sold them at cost!  Wouldn’t it be nice if more restaurants did that!

I wondered what the current retail prices for Valbuena and Único were so I looked in the Vila Viniteca (a fine wine shop) website in Barcelona.